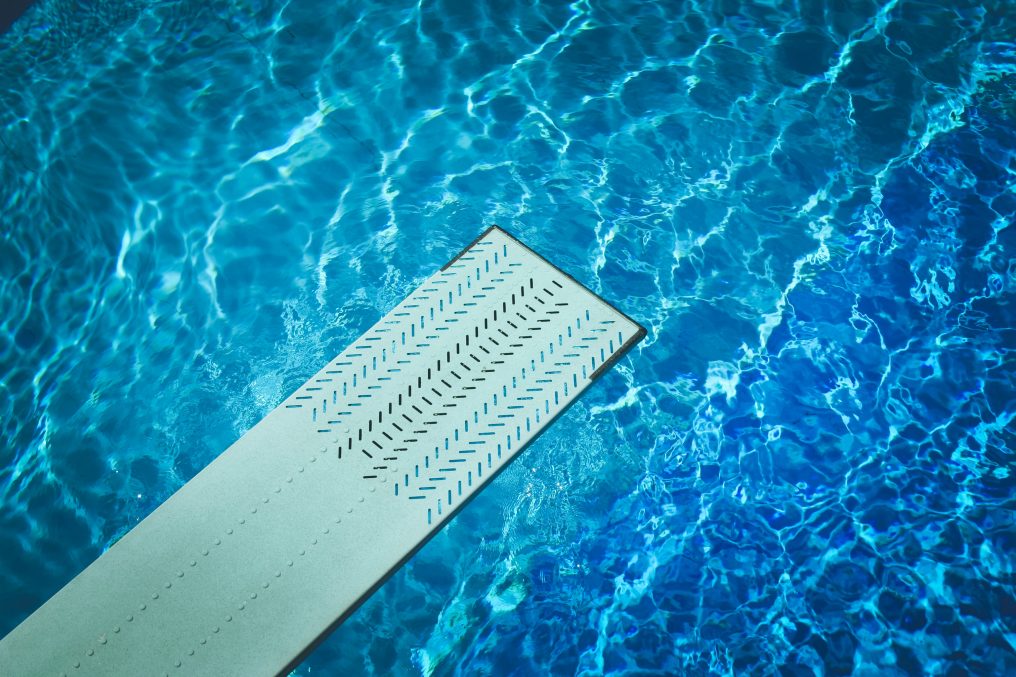 The high dive is no joke. I remember watching people jump off that thing as a kid and thinking they were crazy and awesome.  I really wanted to try it.  Finally, one year I stirred myself up and climbed that long ladder.

I can still remember slowly making my way the end. The board was rough beneath my feet, and I could smell the chlorine wafting up from way down below.  Up there, the wind whips around and you feel the chill as it evaporates the water off your skin.  Up there, people’s eyes are on you, and you’re conscious of the line behind you, waiting for you to jump.

The fear is real.  My heart was pounding as I stared down at the water. I imagined what the drop would feel like. How long?  How scary?  Finally, in one of those great breakthroughs of childhood, I stepped off the edge and plunged like a graceless newborn giraffe into the water.

The crazy thing is, all of life is pretty much like that.

We often talk about people we admire as being “fearless.”  We say this because they’re doing things that would scare us, and so we assume it must not scare them or they wouldn’t do it.

The truth is that courage doesn’t actually exist in the absence of fear. Bravery isn’t never being afraid, it’s being afraid, and yet jumping anyway.  Courage is when we refuse to allow fear to drive our decision making and limit what we believe is possible.

In some sense, then, for bravery to exist, fear must likewise exist.  Valor needs something to overcome.  This should be encouraging, because it means we aren’t cowards for being afraid sometimes.  It means we’re normal.

Everyone feels fear, and what makes us afraid differs from person to person.  That’s why it’s difficult to discern who the truly brave people are around us.  For me, letting a tarantula crawl on my arm would require a supernatural level of bravery. I would have to pray and fast for days (maybe months) prior to that.  For some people though, it’s an everyday job and no big deal.

One Step at a Time

I read about an interesting study where they were trying to help people overcome a debilitating fear of snakes.  Some people are in such bondage to this fear that they can’t hardly leave the house.

The researches put out an ad to say they were going to try to help people with this problem and quite a few showed up.  They explained that physiologically when you run from something it teaches your brain that thing is dangerous.  The more we run, the more it gets built up in our minds as a kind of stronghold.

So they were going to try to reverse engineer this process. They were going to get these people to face their fears. They said, “By the end of the day, our goal is to have you sit in a room by yourself with a python draped across your lap.”

Upon hearing this, several people immediately fainted.  A couple decided to quit, but most stayed.  The researchers said, “We’re going to work up to this, and you can quit anytime.”  Over the next several hours, they walked these folks through a series of escalating encounters with snakes, giving them time to become used to each stage.

They started out just having them look at a snake in a cage in another room. Then they watched someone in the other room handle the snake.  Next, they put them in the same room as the snake in all sorts of elaborate protective gear.  It took all day and lots of stages, but by the end, the majority of the people actually ended up sitting alone in a room with a python draped across their laps.

Amazingly, after this, these people’s lives were totally changed.  They were no longer in bondage to this fear, and it never returned. They were able to lead normal lives again.

This story reminds me of what David did in 1st Samuel.  He ran towards Goliath.  He ran towards the thing he was afraid of, refusing to allow his fears to determine his future.  And on the other side, glory, riches, and honor were waiting for him.

Our destiny is waiting for us on the other side of things we’re afraid of.  Fear of the unknown, of risk, of people, of rejection, etc.  try to keep us out of what God has ordained for us to experience.

What Can I Do Today?

The good news is, while at some point you have to just jump, this study shows us we can work up to it. We can take small steps every day to face our fears and overcome them.

What’s one area where fear is currently limiting your potential?  I guarantee there is a step you can take today to face that fear.

Many people fear rejection. You can combat this by opening up just a little bit to someone today.  Share a part of who you are, and more than likely, you’ll find acceptance and that it wasn’t nearly as scary as you thought.

Other people (myself included) fear conflict.  We don’t deal with issues in our families, workplaces, etc. because we don’t want to rock the boat and deal with the fallout.  Of course, not dealing with it usually makes things worse.  Today we can resolve to run towards our giant and talk about the stuff that needs to be talked about.  Make a to-do list, put that thing at the top and do it first.

I could go on, but I think you get the picture.  God hasn’t given us a spirit of fear (2 Tim 1:7).  This means He didn’t create us to be limited by fear.  He created us to live bold lives that testify of His passionate heart burning within us.

I don’t know what your high dive is, but I want to encourage you—just jump!  God is with you and you are as bold as a lion (Prv 28:1).  Run towards your giants, because in doing so, you’re running towards your destiny!

2 Comments on “Facing Our Fears With Courage”