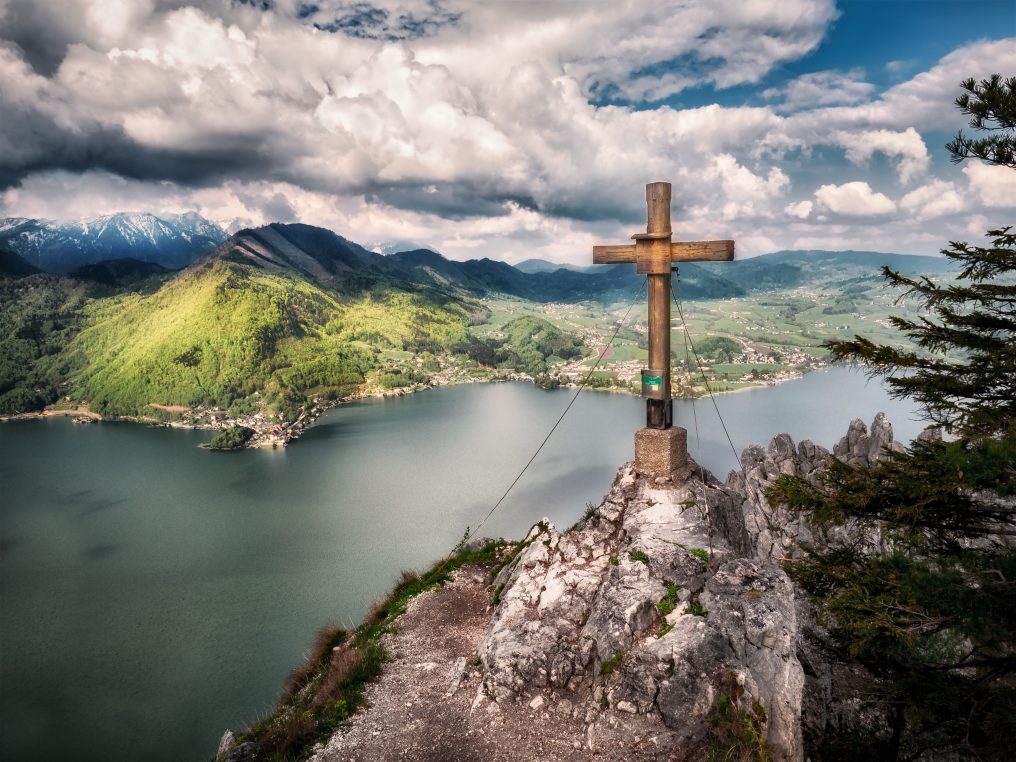 Did you know that all your sins, past, present, and future are already forgiven?

That may seem like a radical statement. How can God forgive sin we haven’t even committed yet?

In Hebrews 10, the author of Hebrews contrasts the Old and New Covenants. In verse 11 he says, “And every priest standeth daily ministering and offering oftetimes the same sacrifices, which can never take away sins.”

He’s saying that under the Mosiac Law there were many sacrifices that were offered over and over again, every day and every year.  These sacrifices renewed the covenant, but they never actually took away people’s sin. People were made clean ceremonially, but never in reality. The stain of sin was still in our hearts.

This was doubtless very frustrating.  Unfortunately, this is still how many people feel in church.  We come to church every week and do various rituals, but we’re told we’re still sinners.  Or, maybe we’re okay until the next time we sin, but then we have to do some ritual to get clean again.  Depending on your background the ritual is different, but most of them involve confessing the sin, either to a person or to God.

The trouble with all of this is that it’s the same endless cycle of trying to do some activity to be made clean, and the effects never seem permanent.  You just have to hope that you die in that space between the ritual and your next blunder.

Thankfully, this isn’t what the New Covenant is actually like.  Heb 10:12 and 14 say, “But this man, after he had offered one sacrifice for sins forever, sat down on the right hand of God…For by one offering he hath perfected for ever them that are sanctified.”

The contrast should be obvious. The priesthood of Moses did a myriad of rituals over and over in a hopeless effort to free people from sin.  Jesus is totally different. He made one offering of Himself on the cross that cleanses people forever. That means the offering reaches into the future and wipes out all sin, even ones we haven’t committed yet.

This must be true, otherwise Jesus would have to keep offering himself over and over. Heb 9:25-26 makes this very argument.

“Nor yet that He should offer Himself often, as the high priest entereth into the holy place every year with the blood of others; for then must he often have suffered since the foundation of the world, but now once in the end of the world hath he appeared to put away sin by the sacrifice of himself.”

Jesus came once at the end of the Old Testament and the start of the New to put away all sin in both the past and future.  Post cross, all sin is put away. We still have to receive this radical gift of grace by faith (Eph 2:8), but when we accept Christ, we access the reality of our complete forgiveness which was accomplished 2000 years ago.

This means that when you sin as a Christian, you’re still clean.  You don’t need to do a ritual to get cleaned up again.  That’s something stunning to think about.  That’s why the Holy Spirit doesn’t leave you when you sin (John 14:16).  What this should do is empower you to run to Jesus when you blow it instead of running away. Heb 10:19 says that we have boldness to enter into God’s presence by the blood of Jesus.

The number one objection to this is, “What about 1 John 1:9?”  You can listen to a whole teaching about this here, but the short answer is that 1 John 1 is written to combat the heresy of early Gnosticism. There were some people teaching that sin wasn’t a real thing and therefore it wasn’t really a problem.

This isn’t true. Sin is real, and it’s a real problem.  Saying we don’t have sin is deceiving ourselves (1 John 1:8), but if we stop being deceived and confesses our sins to God (meaning if we quit being a gnostic unbeliever and accept Christ) we’ll be forgiven of all our sins and cleansed from all unrighteousness (once and for all). (1 John 1:9).  In other words, we do 1 John 1:9 at the point of our conversion, after this confessing our sins is unnecessary for the purpose being forgiven (although it’s still healthy to own up to God and others when you blow it).

The other common objection is, “What’s to keep people from sinning if all their sins are already forgiven?”  That question assumes that deep in Christians’ hearts they really want to sin, but the fear of punishment or hell is what’s keeping them back.

I believe that people who accept Christ really have their natures changed (2 Cor 5:17), and that they want to do the will of God (Phil 2:12).  Sometimes we still fight sinful desires, but this comes primarily from not understanding who we are in Christ and that our old man is dead (Rom 6:1-3). I think that deep down, Christians really want to serve God, but religious bondages prevent them from doing it.

This was true in my own life.  I thought that God couldn’t fellowship with me if I had unconfessed sin. For years I had unforgiveness in my heart towards my dad.  I didn’t fear hell, but I thought God couldn’t talk to me unless I straightened myself out.  The problem was I could confess the sin, but I felt that every moment I didn’t restore the relationship I was sinning again, so it was impossible to keep up the ritual. I was doing a bunch of religious exercises trying to make myself clean, but it doesn’t work!

Imagine my joy when I discovered that I was already clean forever in Christ!  This didn’t cause me to double down on my anger, but rather to forgive and restore the relationship.

This is what I call the Divine gamble.  It’s God’s bet that if He goes all in in His commitment to us, we’ll respond the right way.  It’s entirely possible for people to abuse grace.  However, God believes that if you really see grace for what it is, you won’t.  He gave us something so priceless and powerful (and did it freely) that when we really see it for what it is, we’ll labor to live in a way that honors the gift.

Presenting the gospel otherwise lessens the impact of what Christ accomplished. It puts the burden for our salvation on our own backs and causes us to live from anxiety rather than thankfulness.

In the end, our theology is simplified if we just think about God as a good Father.  Good father’s stay engaged when their kids blow it. They say, “I love you no matter what, and I’m here to help you clean up your messes.” This kind of unconditional love causes kids to love their parents back and make decisions that honor them.

Growing up, I knew there was nothing I could ever do that would cause my mom not to love and accept me. I knew this because she told me, and because she demonstrated it. Because of that, I never really rebelled or tested it. There was nothing to rebel against. Rebellion is often triggered by a heart that perceives it’s loved conditionally (even if that isn’t true).

Most Christian rebellion against God exists because of the religious lie that God is mad at us or rejecting us because of sin.  If we’ll stop telling people that stuff, they’ll start running back to the Father, because they know His arms are open wide!