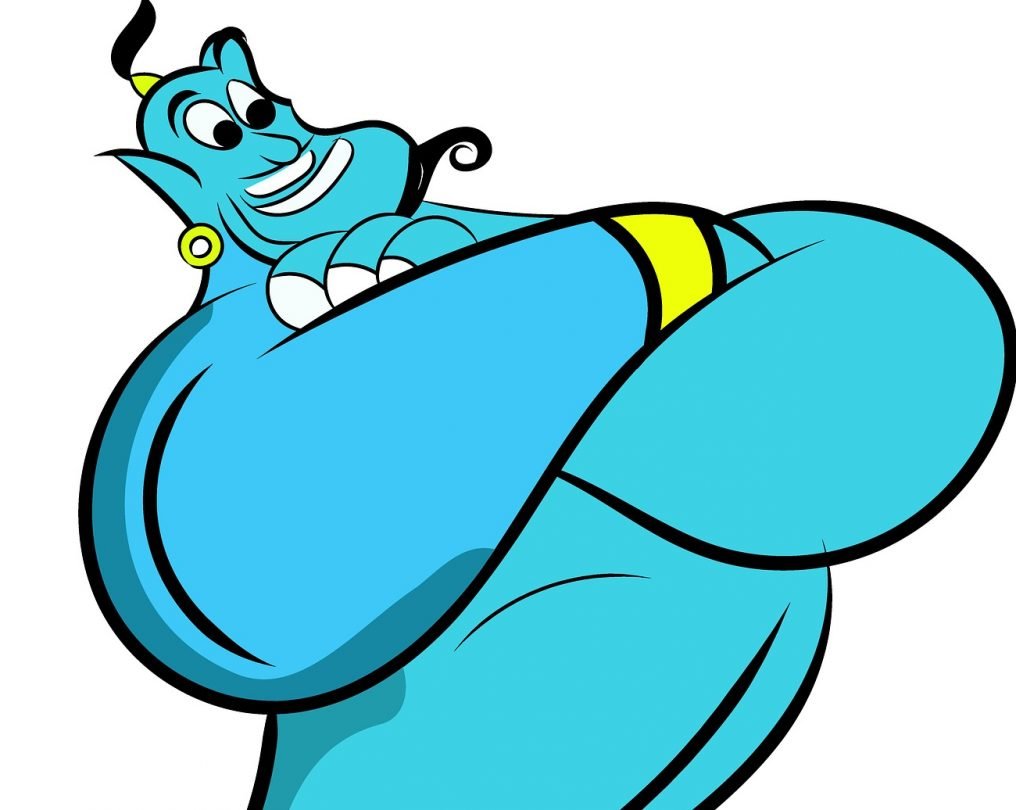 Recently I was reading the book version of Disney’s Aladdinto my kids.  If you don’t remember it, it’s the one where Robbin Williams is the Genie and he partners with “Al” to rescue princess Jasmine and the Sultan from the evil wiles of the counselor Jafar.

As I was reading it, something really jumped out to me.  The way genies work in the story is that if you rub their lamp, the genie becomes your slave for 3 wishes.  You have total control over the genie, and you get the instant gratification of having 3 of your wishes granted.

The problem with this set up, of course, is that it’s a terribly imbalanced relationship. The genie has no freedom (which is emphasized by the metal cuffs around his wrists) and he has to do whatever is asked of him even if he doesn’t like the person making the wishes.

Meanwhile, Aladdin (or whoever rubs the lamp) is very limited in what he can receive from the genie. Once the 3 wishes are over, his control over the genie is ended, and zap—end of relationship.

Aladdin does something really brave at the end of the film, however.  He chooses to sacrifice his own personal desire to be a prince (so he can marry Jasmine), and instead uses his last wish to free the genie.  When he gives up control over the genie, something magical happens:  he ends up in a healthy, lifelong relationship with him that benefits both of them (as evidenced by the sequels).

You may be thinking, “You’re really overanalyzing that Disney flick.”  To which I’d respond, “I can’t help it, I’m a recovering English teacher.”

But in all seriousness, this is a really important lesson we’ve got to learn:  the only way to have healthy relationships with anyone is to stop trying to control them.  This is scary, because if we give up control, we fear we may no longer get what we want. We might not get anymore wishes.

What we don’t realize, however, is that if we’re using controlling relational tactics to get what we want, we’re not ever going to find the fulfilment that we really long for. At some point, people will get tired of our behavior, we’ll run out of wishes, and zap—relationship over.

In relationships, we typically try to control one another in one of 3 ways.

1) Aggressive communication. This when I try to get what I want from people by using my anger to scare them into compliance.  I might yell, curse, throw things, or physically intimidate people.  Threats, whether loud or subtle, also fall into this category.  If I’m in a relationship, and I threaten to leave when I don’t get my way, I’m being an aggressive communicator (even if I do it quietly).

2) Passive communication. This is when I try to get what I want by withdrawing from people and giving them the cold shoulder.  I may not even be aware of it because I think I’m just sad, but what I’m effectively doing is punishing people by being absent (physically or emotionally).  If I isolate myself so that people will come to me and beg for forgiveness (after I make them sweat for not knowing what they’ve done) I’m being a passive communicator.

3) Passive-aggressive communication.  This is basically trying to be aggressive, but from cover. It’s when I make sarcastic and biting comments, without directly coming out and attacking people.  I might say, “Thanks for helping me with the kids so much today” (when no such help was rendered).  If I say attacking things, but then laugh as though it’s a joke, or I hide behind sarcasm, I’m probably being passive-aggressive.

All of these 3 types of communication are basically trying to rub the lamp and make the genie come out. We’re not putting ourselves at risk at all, and instead are demanding others meet our needs.  It’s not that this can’t work for a bit. It can, but it’s a pale shadow of the real thing and ultimately falls apart.

The answer to all of this is to wish that the genie was free.  It’s to recognize that I actually have zero control over other people.  The best thing I can do is honestly present my needs and feelings, and then hope that people will respond in a loving and helpful way.

The shocking thing is, when we do this, often we end up getting the thing we want with far less effort.

Now certainly sometimes we’ll get a “No.”  This is painful, but the sooner you learn to hear it and deal with it, the easier it is to move on to something, (or sometimes someone) else.

So instead of saying, “Thanks for all the help with the kids today,” We start to say things like: “I feel overwhelmed with my responsibilities.  I need to feel like I’m not alone in dealing with these problems.”

Talking like this gets to the real heart of the issue and gives people the opportunity to respond powerfully to our needs, rather than guilting or scaring them into helping us. The real magic is not with genies and lamps, but when two powerful people choose to voluntarily love each other and meet one another’s needs.