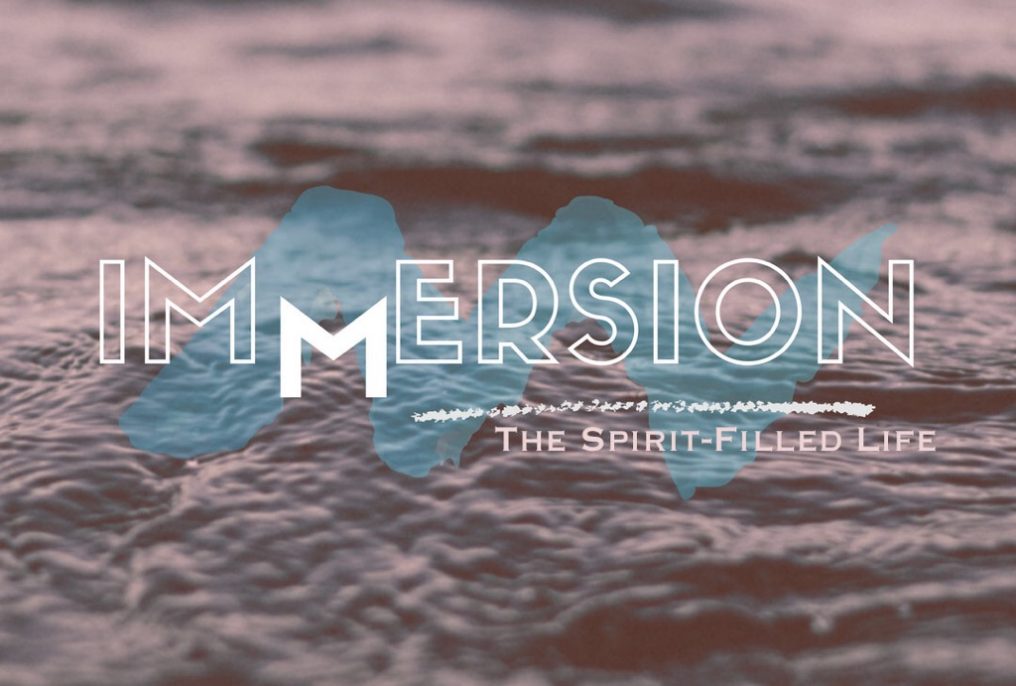 Are you filled with the Holy Spirit?

This is a loaded question, but where does it come from?  In Matthew 3:11, John the Baptist announces that Jesus is going to baptize people into the Holy Spirit. He’s saying that Jesus is so powerful, He is actually able to take sinful, broken humans and immerse them into the Godhead.  It’s a radical statement.  Jesus’ mission is to find a way to forever unify humanity and Divinity.

The trouble is we tend to get lost debating when this occurred, rather than focusing on experiencing the reality that it has occurred.

It’s not that the debates are unimportant, or that we shouldn’t strive for clarity in these issues, but we’re summoned into a lifetime of encounter and immersion in God, not a one-time event.  When you see it that way, fighting over when the first one happened becomes less important.

Just over 500 years ago the protestant reformation occurred. One of the eventual outgrowths of this movement was the rejection of infant baptism. Previously, in Catholicism, infant baptism was seen as our introduction into the Christian community, placing us in a “state of grace” which secured our entrance into heaven (until later in adulthood when we have to do other things after committing mortal sins).

For Catholics and also Lutherans, regeneration, or being “born again” occurs at the point of baptism. This is why it’s so vitally important.  Martin Luther agreed with this, but later protestant groups like the anabaptists and the baptists rejected the idea, believing instead that salvation must come at the point of one’s individual faith.

This today is the mainline evangelical position, that we are “born again” or regenerated when we accept Jesus as our personal Lord and Savior.  Both traditions believe—accurately in my opinion—that at the point of salvation, a person receives the Holy Spirit.  Rom 8:9 says that if anyone doesn’t have the Spirit of Christ, he is none of His (meaning he hasn’t been regenerated).

So, whenever someone is born again, they must receive the Spirit of Christ. (This is in fact the very definition of what it means to be a Christian—to have God living inside you).

Interestingly, another division cropped up a little over 100 years ago with the rise of Pentecostalism.  Pentecostals were experiencing something in God that took place after their conversion.  Many people were having experiences with God which resulted in speaking in tongues (primarily) but also other manifestations like healing, prophesy, laughing, and other ecstatic phenomena. They insisted that this was actually the baptism of the Holy Spirit that John was talking about.

There tend to be, then, 3 current views about the baptism of the Holy Spirit:

1) Catholic/Lutheran:  It occurs at baptism

2) Evangelical:  It occurs when you’re born again via your personal decision to accept Christ

3) Pentecostal/Charismatic:  It occurs subsequent to conversion when you have some kind of manifestation of the Spirit.

When did you get married?

Rather than take sides, I’d like to suggest an analogy to help us honor these different viewpoints. Being united to God is rather like a marriage.  The trouble with marriage is, it’s actually rather difficult to nail down exactly when it occurred. Was it when you signed the marriage license?  When the Pastor said, “I now pronounce you husband and wife?” Or when you consummated the marriage later?

You can make a valid argument for all three of those.  Catholics believe strongly in the ability of apostolic leaders to do rituals which confer grace on people. Effectively, they’re arguing that the marriage takes place when the minister says, “I now pronounce you.”  Evangelicals, which tend to be concerned with the legal side of things, argue for marriage occurring when the paperwork is signed.  Pentecostals and Charismatics (who love experiencing things) argue for the consummation.

While this is a reasonable debate to engage in, in the life of most Christians, it tends to miss the bigger question. The bigger question isn’t so much, “When did you get married?” But “What is your relationship like now?”

The fact of the matter is, if you’re a Christian, you’re filled with the Holy Spirit. God lives in you.  We can debate about when that happened if you want, but a more pressing question is, “What’s your relationship with God like right now?”  “Are you still in love?”  “Are you experiencing the benefits of the union that Jesus purchased?”

In Scripture, the baptism of the Holy Spirit wasn’t just a one-time event.  Rather, it was an initiation into a lifetime of being filled and overwhelmed again and again with the glory of God.

Different encounters with God often seem to end up strengthening different areas of our lives.  I’ve had an encounter with God where I spoke in tongues for the first time.  I’ve had others where afterward I saw more people healed.  Still others worked in me a deep sense of God’s love for me.

Eph 5:18 in the literal Greek says that we are to “be being” filled with the Holy Spirit.  Or, to always be in the process of being filled again and again with the reality of God.  This may sound abstract, but the practical reality is it’s just saying continue to cultivate an intimate relationship with God which results in experiential encounters with Him over and over.

We love dramatic, powerful experiences, but we’re not really after the encounter of a lifetime. Rather, we want to live lives full of encounters!  We want as much of the glory of God as we can stand, and are thankful for the wide variety of ways in which this occurs.

Want more resources to help you connect with the reality of your union with God?  Check out our Immersion series!  Also, be at church Sunday for our special impartation service!