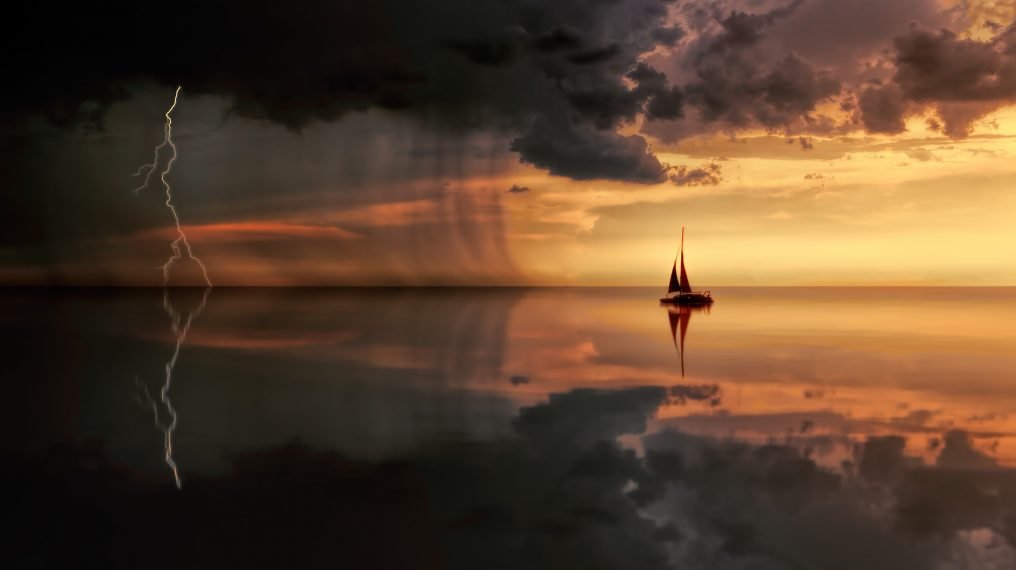 The other day I was listening to someone teach about the time Jesus’s disciples almost drowned in the boat as they crossed the sea of Galilee.  It’s always intense to imagine 12 guys, many of whom were experienced sailors, panicking because of a storm.  It must have been pretty serious!

The teacher went on to make the point that the disciples were in that storm as a direct result of following Jesus.  He had ordered them to cross to the other side, so in effect, he was responsible for them being in the storm’s path.

This story shows us that sometimes we face hardship in life because of our commitment to Jesus. Persecution can arise, we can lose friendships, and in extreme cases, even face martyrdom. These are all things the early church faced, and Christians continue to deal with today.

That is all obviously true. However, from there the teacher made a jump in logic that I think is overbroad.  He said, “If you’re in a storm, it’s because Jesus has put you there.”

That’s a really stunning statement.  Statements like that often get made in various places without a lot of explanation. They’re meant well.  The rationale is that if Jesus got me into this storm, He will see me through.

That’s certainly an encouraging thought—to some extent—but it ignores the fact that not everything we do in life is the direct result of obeying the voice of God.  If somehow we followed God perfectly, you might be able to make this argument (although I still wouldn’t agree), but none of us do.

We’ve all been places and done things that were directly disobedient to His wishes.  It’s called sin, and we’ve all done it (Rom 3:23).  Sin has consequences (Rom 6:23).  To say that every storm in my life is caused by Jesus is to make Jesus a party to my sin. Let me explain:

Let’s pretend for a moment that I stopped helping my wife with the kids, quit my job, and sat in my basement and pursued my passion of stamp collecting.  Say people tried to get me to engage with my life and reconnect with my family, but I’m too lost in philately to care. After a while, my wife decides she’s had enough and files for divorce. Suddenly, I’m looking at no income, no family, and not much hope for the future.  That’s a pretty bad storm.

If I followed the line thinking spelled out in this teaching, I would be forced to conclude that Jesus had brought this storm into my life. I would rail against God for causing my family to hate me and robbing me of my work ethic.  I would pray, “God, save me from this storm!”

The truth is, though, that in this example this is a storm entirely of my own making. Jesus didn’t tell me to stop loving my family and to stop working.  In fact, He expressly commands me to love and honor my family and to work hard to support them (1 Tim 5:8).  In this scenario, I can’t legitimately say that I’m in the storm because of Jesus.

Telling people, “If you’re in a storm, Jesus put you there,” is, in my view, an ill-advised over-generalization. I don’t know enough about every situation.  It might be true.  Paul was literally and figuratively in lots of storms because he followed Jesus.  Those storms exist, but so do ones we create on our own.

On the other side of things is this truth:  telling people, “If you’re in a storm, it’s your fault” is also an ill-advised, overgeneralization.  Again, real life requires nuance and understanding the specifics of the situation.

We are often very quick to judge people that have problems.  We do this because of our own insecurities. It’s frightening when people go through hardship (because it means we could to), so we want them to have done something to deserve it.  That way, we can assure ourselves it won’t happen to us because we haven’t made the same mistakes.

This is what Job’s friends were doing.  They saw all these terrible things happening in Job’s life. It made them afraid because it showed that if something like that could happen to Job it could happen to them.  To assuage these fears, they convinced themselves that Job was secretly a terrible person.

But here’s the thing about Job’s storm:  it wasn’t caused by Job, and it also wasn’t caused by God. You who know caused it? The devil.  The devil is a real person, but he also represents external forces of chaos and evil that are loose on the earth.  Random, weird, and awful stuff can happen for no other reason than that the earth is in a fallen state and hasn’t been fully delivered yet.

Each of these reasons requires a different response.  In some cases, I just need to endure because of my love for Jesus.  In other cases, I need to alter my behavior and stop making poor choices. Still in others I need to resist the attack of the enemy.  What I don’t need is to oversimplify and assume I know what everyone’s problem is without really engaging with them.

But I’ll take it one step further.  There is mystery in the world, and I’m not even comfortable limiting what’s going on to those 3 possibilities. I could be missing something and there could be other reasons for storms.

So instead of blanket statements about why problems exist, here’s what I’ve started saying: “If you’re going through a storm, Jesus is the answer and wants to help you.” Regardless of why the storm is there, Jesus wants to calm it.

The other thing I try to do is that unless someone invites me into their storm by asking for advice, I don’t try to figure out why it’s there.  That way I stay out of judgmental attitudes and offence.

I’ve sat with a lot of people and looked at a lot of storms.  There are a few times I can think of that knowing why the storm was there helped. But there are many more where I didn’t know, and even as we tried to figure it out it was something of a mystery.  Thankfully, we don’t have to know why in order to see them bow to the name Jesus!

The point of the story of disciples crossing the sea isn’t so much that they were in the storm, it’s that Jesus got them safely to the other side.  We can be assured He’ll do this if we’ll stay focused on Him, regardless of why we’re in the situation in the first place!

2 Comments on “What’s Causing the Storms in our Lives?”